Here at Cooking Sense, there are some of us who absolutely love beer, then there are the rest of us who just don’t get what’s the big deal. The one thing that we can all definitely agree on though, is that we love cooking with beer.

We recently invited Chef Leigh-Ann Martin from Gasparillo Junction blog  to our kitchen to do just that. It was a chill evening for all.

We DIY’d tahini and tried incorporating beer into hummus. While the hummus tasted great, the flavour of the beer got lost somewhere between the garlic and lemon notes. Leigh-Ann took the idea back with her to New York, where she tested different recipes and ratios and found that simmering the peas in the beer let out more of the brews’ bold flavour. Eu-re-ka! 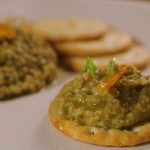