Saturday.  Yes, it was normally on a Saturday that my Gramma Lou prepared her black cakes.  Consistently Saturdays.  For nothing should ever disrupt her Sunday morning mass and 12-noon lunch times.

She would lift and fold the plastic tablecloth in half, exposing the bare wood tabletop to which she would attach the manual food grinder. Back then, this machine that only appeared for the season, looked complicated as she sanitized, assembled and secured it to the corner of the wooden tabletop.  On the kitchen table also sat two mega-sized jars, tinted with dark liquid and black jewel-like content.  Next to those were two shiny (almost new), blue-colored enamel basins and a long-handled stainless steel cooking spoon.  She was ready to begin then.

Grams steered the ship, spoon feeding the spout of the food grinder with the dried fruits soaked in sherry and dark rum, making sure each juicy morsel ran through the grinder blades perfectly and landed in the basins.  My Aunt, her first mate, fussed (under her breath) as she changed hands.  Left-hand to right-hand, they made clockwise motions powering the grinder until sunset.  Me, I stood at the kitchen door trying not to block out the natural light and the much-needed breeze occasionally blowing in through the top-half of the door.  My eyes, earnestly following the motions of hands and commands of mouths.

I can’t remember exactly when my Grams would soak her dried fruit or grind them.  Damn, and it never occurred to me to ask the ratio of dried sultanas to dried prunes.  But I know she was a serious woman when it came to baking, particularly cakes made for the holidays.  And every year, early in the Christmas season she started her preparations. Even though I am not using her recipe nor am I making anywhere near the quantity of black cakes that my Grams made, I know she’d be proud that I’m sticking to her tradition… or, that I picked up her trait of timeliness.

Grinding the Fruits – just as my Grams always did, so do I.  If you don’t have a KitchenAid grinder attachment, you can pulse the fruit in a food processor until it’s to your desired consistency.  This can be done a week or the day before baking.

Browning.  It is a key ingredient in making this cake and one that sets it apart from other ‘rum cakes’.

Okay, I cheated!  My friend from Tobago always has browning or caramelized sugar on hand.  Different from the browning used in savoury dishes like Pelau and Stewed Chicken, she makes the thick, sweet syrup to drizzle on ice cream!! Store-bought browning does the trick but here is a link to make your own browning.  This can be done ahead of time and stored in a cool place.

These cakes have a long shelf life and can be made one to two weeks ahead of time.  For that Boxing Day party, make them the first or second week of December.  Even earlier if desired!

Take stock.  Make sure you have all ingredients, cooking and baking utensils, a cool place to store the cakes and your prized heirloom recipe.

The colour of the black cake batter should be a dark walnut. If the color looks medium walnut, stir in more browning as needed.

Get my Trinidad Black Cake recipe here. This recipe makes 2 (9-inch) cakes. Let me know how it goes. Season’s Greetings! 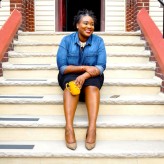 My Trinidadian upbringing meets NYC living and the creation of sexy food designed & portioned for this amazing single life cooking.